On October 2nd, 2013 Walking With Our Sisters opened in Edmonton at the Telus Centre Atrium, University of Alberta.

This was the first of what will be many such openings as the WWOS exhibit will be touring nationally until at least 2019.

As with all the stops along the tour part of the planning leading up to the opening included Community Conversations.

“An important aspect of the Walking With Our Sisters Exhibit is the involvement and inclusion of the community, where the Vamps/Uppers are going to be on display. With this in mind, the Edmonton Planning Committee (Tanya Kappo, Tara Kappo and Tracy Bear) will have three Community Conversations…This invitation to the Community Conversations is extended to anyone who would like to be involved in some way, or who may have some ideas to share, both Aboriginal and Non-Aboriginal people and organizations.” (More info on the Facebook Event Page)

A one day symposium “AMIQAAQ III: Ending Violence Against Indigenous Women” was also held at the University of Alberta while the exhibit was installed.

The WWOS Exhibit attracted media attention from the Globe & Mail. Robert Everett-Green interviewed WWOS’s Tanya Kappo (Lead Coordinator, Media Contact & “Keeper” Support) who had this to say about the exhibit.

“The vamps have this intense energy around them that I can’t explain,” Ms. Kappo says. “It seems to grow as more people see and interact with them.”

They will be displayed along a winding path of heavy fabric with space on one side for viewers to walk without shoes. “Since the work is on the floor, people’s heads will be bowed, they’ll be looking down,” Ms. Belcourt says. “It’s quite humbling, in a way, and they’ll be walking on cloth, so I expect they’ll have to walk softly.”

She’s hoping that soft tread will be heard in Ottawa, where the government recently rejected a call by all 10 provincial premiers for a national inquiry into violence against indigenous women, and rebuffed a critical report on the issue from the UN Human Rights Council. A one-year parliamentary committee on the issue, struck in February after a damning report from Human Rights Watch, dissolved when Parliament was prorogued. (Read more on the Globe & Mail article)

A few weeks prior to the opening Christi Belcourt was interviewed by Red Man Laughing’s Ryan McMahon about the Walking With Our Sisters Project. You can listen to the interview here. 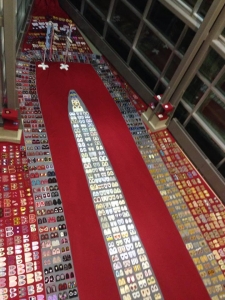 “NWAC and its Board of Directors offer their heartfelt congratulations to Ms. Belcourt, all the beaders, as well as to the countless volunteers and communities that going to host this traveling exhibit in the years to come. NWAC Interim President Dawn Lavell Harvard added, “NWAC staff as well as several affiliate members, including the Ontario Native Women’s Association, participated in this creative and inspiring project by starting their own beading groups and submitting several dozen vamps. It has been a wonderful healing and powerful endeavor for us all and we wish this exhibit a safe journey as it tours.” (Read more on NWAC)

“Through our work at NYSHN we know that art is a powerful and effective tool for Indigenous Peoples to express our cultures, stories and experiences. For many of us, arts-based methods offer more inclusive opportunities, especially for young people, to express their emotions and experiences, while articulating impacts of systemic violence like racism and colonization.“ (Read more on NYSHN)

On the weekend of Sept 7 – 8, 2013 volunteers in Edmonton met to open the boxes for the first time and reflect on what the project means. The videos below capture those reflections.

From start to finish many volunteers ensured that the vamps were safely packed, delivered and installed, WWOS thanks everyone for their contribution to a successful and moving exhibit! 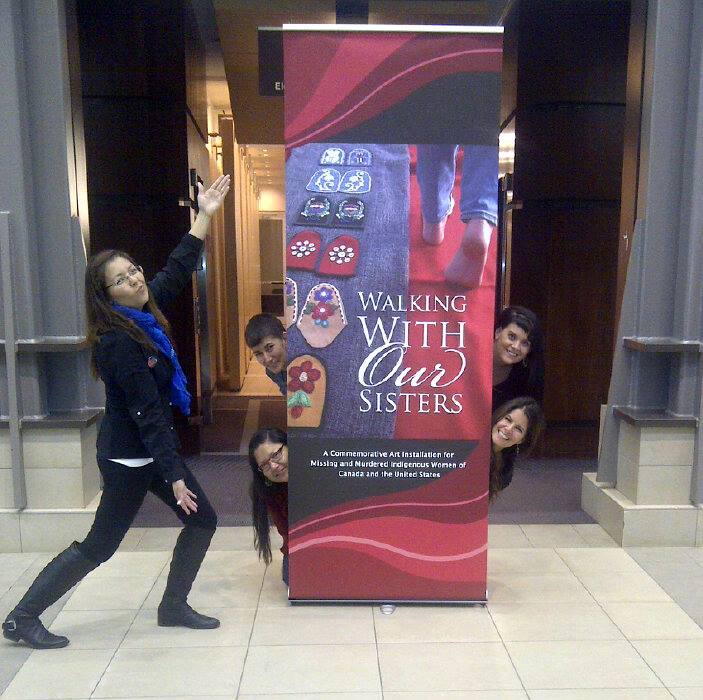 MEDIA ON WALKING WITH OUR SISTERS EXHIBIT:

Walking With Our Sisters is an art installationthat honors the lives of our Indigenous women and girls – our mothers, ourdaughters, our sisters, our nieces, our cousins and our granddaughters – who have become missing and murdered.  We invite you to join us at the premiere of this international touring art exhibit that opens at the Telus Centre’s Atrium (111 Street and 87 Avenue NW), University of Alberta in Edmonton on October 2, 2013, running through to October 13, 2013.

Also on the opening day, October 2, 2013, therewill be a Tea and Bannock Reception, hosted by the U of A Aboriginal Student Services Centre. This will be held at the Dinwoodie Lounge (2nd Floor,Students’ Union Building, University of Alberta at 8900 114 St NW) from 10:00am – 12:00 pm. You are more than welcome to this free event. Lead Coordinatorof WWOS, Métis artist Christi Belcourt will be in attendance forthe opening of the Exhibit and for the Tea and Bannock Reception.

In recognition of your relationship with the women and girls we honour, there will also be remembrance ribbons and a special guest book available for you. And, we would like to let you know that family members and friends are invited to bring forth an eagle feather or a hawk feather at anytime during the exhibit, as a remembrance to your loved one that will be attached to one of the to eagle staffs that are part of the exhibit. They were dreamed by Anishinaabe knowledge holder Peter “Alo” White (NaotkamegwanningFirst Nation, Treaty 3 Territory). One staff is in honour of those still missing and the other staff is in honour of those who have been murdered.
This project has already brought together thousands of people from North America and is increasingly becoming a form of justice and healing by bringing us together through art, ceremony, remembrance and community. We sincerely hope to see you during the exhibit as we honour and pay tribute to your loved ones.

If you have any questions, please contact Tanya Kappo by email: tanya@wwos.ca